I have only a popular reading knowledge of quantum physics, theoretical physics, evolutionary biology, and theoretical biology, so after attempting to recruit others with expertise, it is with some reluctance that I am reviewing this attention-getting, if not revolutionary, work. Fortunately, for the non-specialist, throughout the book the organization, presentation of the materials, plus welcomed summaries at the ends of chapters, usually give Kauffman’s message clarity.

Basically, Kauffman is involved in arguing in favor of restoring mind to the universe, misplaced by Descartes and lost since Newton. Because the classical concept of matter does not accommodate mind, consciousness, free will, or the subjective pole, it will be necessary to look to the quantum world to “redefine” the material world, thus the universe. This enterprise has been advanced with an application to the biosphere by the newly defined field of quantum biology.

With the quantum approach, mind or consciousness is not an epiphenomenon of matter but a property found at the fundamental level of physics. The idea that consciousness is associated with measurement creates a “quantum enigma;” quantum mechanics “seems to point beyond physics” and scientific objectivity to a world which is also subjective. How can one assume a position of looking at the world from outside of it?

The door is opened to questioning not only traditional ideas of matter, but of law and causation by which everything in the universe is entailed. Quantum entanglement is a critical attribute of a new understanding of matter, not only for the behavior of an electron, but for matter as a whole. While quantum behavior weakens the scientific and logical force of reductive materialism, it is “stopped cold” by the evolved biosphere, the most complex system we know of in the universe, of which humans are a part, thus beyond entailing law. There is freedom, or free-will, in the universe, though not apart from contexts and environments; neglecting these renders freedom nonsensical.

A new view of Panpsychism

Kaufmann argues for a new view of panpsychism which rejects a Cartesian substance dualism but offers something of a restoration, albeit of a different kind, by implications of the measurable, or perhaps measuring, behavior of subatomic particles, if I can use that term without offending the attribute of waves. Beyond Heisenberg’s uncertainty principle where the momentum and position of an electron cannot be predicted by laws of classical mechanics, Kauffman’s dualism suggests a kind of mind at work in the way particles measure each other or relate to each other: electrons exchange photons and fermions exchange bosons. Measuring correlates with a conscious, responsible free-willing which changes the universe as the universe offers opportunities. 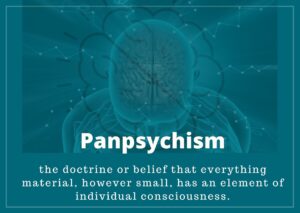 Basically, at the subatomic level measurement is occurring within the assemblage of wave/particles themselves. Rather than a causal process classically understood, where laws are the foundation of everything that comes to be, “enablement” is proffered. Enablement is an acausal quantum alternative, a way the participatory universe creates itself as matter, not as the entailments of disembodied foundational laws, or by random acts. Again, we can speak of free-will! The universe is not deterministic; things could have been different.

The development of the entire universe is the creative results of these types of conscious measurements which do not pre-state what is to be, but “enable” one kind of result, or coming to be, rather than another. But does anything exist before it is humanly observed or measured? In the case human consciousness, it can change the world; but objects in the universe, say the moon, exist before we observe them because “quantum variables co-measure, and hence co-trap one another” making the moon “classical enough” so that it is not “smeared around its orbit.” I will not comment further on this point, rather refer the reader to Kauffman’s discussion of the quantum Zeno effect, pp. 209 ff.

< It’s All Mr. Newton’s Fault > Language and the Creation of Reality