Religion as an Art Form: An Overview

Why Religion as an Art Form?

From the rise of science, its relationship with religion has been one of tension. The application of the Copernican Principle (world and the human must continually be removed from the center), progressively elevated the objective and scientific mentality over the religious as the measure of reality.

More broadly, historically, all critical methodologies confronting religious expressions have demeaned them as being false both factually, and causally. In time, the entailments and operational processes of the universe being understood as governed by laws, deterministic, and existing apart from the universe, and outside of human existence, thought, and action, not only stripped away theological concepts of inspiration and revelation, but jettisoned the idea of freedom both in the universe and human action. 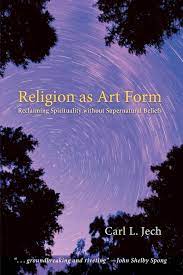 Religion as an Art Form

The universe became a machine; humans were deprived of consciousness, free-will, self-identity, and the values associated with emotive expressions. With respect to reality these were illusory. In a sense humans were dehumanized. Quantum physics claimed reality was dependent on measurements made by a conscious observer, and the uncertainty principle offered a degree of freedom in the world; but the element of conscious observation altering the world was considered, to some, suspect.

Presently, largely due to the rise of the cognitive sciences, non-Cartesian linguistics, and a few theoretical scientists, laws are considered to be embodied expressions, their existence inseparable from their environments, and themselves responsible to a kind of prior causation, even acausation. The cognitive sciences have demonstrated that rational thinking is dependent on metaphors gained by experience and that scientific rationality cannot employ logic and mathematics to make claims beyond what is empirically accessible.

The presuppositions of science began to gravitate to earth and the function of the human brain and mind became central to understanding. Cognitive neuroscience, particularly in the form of neurotheology began investigating brain functions involving religious data and influence. The discipline is in its infancy, but seeks to integrate body, and mind, which has several referents, including soul, and seeks to understand the brain’s propensity for religious/spiritual content by scientific means. Since it claims it is not beholden to either science or God, it appears to be epistemologically novel and independent. Because God is the appositive to science, it would seem that the reference to God would be better understood as referencing revelation rather than the successes or failures of attempts to prove God’s existence. How successful the research will be in defining human identity is still a work in process.