Thoughts on Assumptions: In The Beginning

The Fall 2010 issue of Adventist Today started me thinking about assumptions. Multiple authors in that issue were careful to spell out their underlying assumptions as they acknowledged how important assumptions are to keep in mind when one is articulating one’s position on a particular topic. It seems that sometimes where one ends up depends upon where one starts out. Assumptions have to do with starting out.

It is not my intention here to critique those assumptions made by the authors, in Adventist Today, alluded to in the previous paragraph; rather my focus will be on the human phenomenon of making assumptions. Surely Adventist Today readers will agree that the making of assumptions is a human activity. Why do humans do that? Are there important assumptions humans operate under unawares? Do these assumptions affect us more than we realize? Does my western mindset drive me in certain directions without my realizing it?

I will make use of Genesis 1:1 (KJV) as my starting point:

In the beginning God created the heaven and the earth.

Surely that is a sentence that is sufficiently specific yet sufficiently general that it can be interpreted meaningfully in times and places and cultures far removed from those of its origins. Any sentence that can do that is significant and deserves careful consideration. But there is no way that anyone today can interpret those words using the mindset of The Ancients who wrote them originally in another language. In fact, there is no originally. For all practical purposes, the ideas undergirding those words have been around forever. For more on on word meaning see Language and the Creation of Reality.

In the Beginning Assumptions

Now this brief essay is not about what that sentence meant to ancient cultures nor what it should or could mean to our modern culture. Rather, I am interested in reading between the words and analyzing what underlying assumptions might be lurking, perhaps subconsciously, in the minds of twenty-first century English speaking people who read them. Since I can’t read them without interpreting them, I will take them at face value—read them literally: 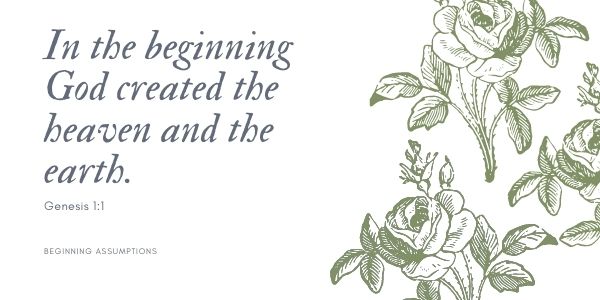 “In the beginning…” Right away that says something important about how our minds work. It says that a basic (albeit subconscious but very fundamental and significant) assumption we make is that things must have a beginning. We need beginnings; our minds need beginnings. But just because we need them does not mean beginnings always actually exist; it does, however, mean that we will inevitably behave and arrange our thoughts as if they do. For that matter, we create our theologies and our sciences that way too. Humans in general are reasonably comfortable that once something has had its beginning it can go on forever. But the idea that something could already have gone on forever is anathema.

“…God…” Another assumption, this one consciously made: God exists. No attempt is made to argue for the truth of this assumption. Just assume that God exists. Nothing is said about the attributes of this God that exists—with one important exception: this God creates. But this exception is also a conscious, deliberately made, assumption.

“…created the heaven and the earth.” There, that explains everything that is really important. There was a beginning before our human beginning, God was there at that earlier beginning, and while there God created, making for us a beginning and a place to exist. A consciously made assumption. 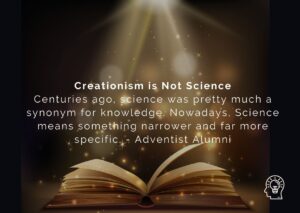 Might there be yet another subconscious, unrecognized, and unacknowledged assumption? There is. Another fundamental property of how the western human mind works is hidden beneath my chosen sentence. That is the assumption that effects must have causes and vice versa. It is the primary business of scientists, historians, politicians, economists, for that matter anybody who explains and plans accordingly, to study causes and effects. They assume there is always a correspondence. A cause must eventually have an effect.

An effect must have already had a cause. But is this really really true? Probably not, whether or not we are able to decide what the question really means [we can’t]. That there is a tight relationship between causes and effects we very much believe; and we act accordingly, usually without being aware that we do so. The problem is, as quantum physicists tell us, the relationship between cause and effect is much more tenuous than we would like it to be. Thus, while most effects have causes it would be wise that we not insist that this is always the case.

How to spot Cause and Effect

So, we see in this brief sentence: (1) that humans recognized an effect: their existence and their domain of existence – the heavens and the earth; (2) they needed a cause for that effect; and (3) that cause must satisfy their need for all things to have beginnings.

But the existence of this verse is itself an effect looking for a cause. That cause is that humans are driven to explain. In the process of explaining they work backwards along the chain of effects having causes until they get stuck without a cause, without a beginning. Then they make more assumptions, often oblivious to the ones they are already working under. They create causes and assume them to be true without trying to prove their truth. This becomes their explanation. And there is nothing inherently wrong with doing this. Obviously if they could prove their assumed cause to be true it would then cease to be an assumption. The point is that sooner or later even philosophers have to give up chasing the effect-to-cause chain and agree to an assumed starting point.

The reader should understand that I am talking about basic assumptions that affect how one lives their life; assumptions that determine to a large extent one’s world view. How about assumptions that control an entire very large group of people like a nation, a religion, a political organization?

I am not talking about technical assumptions made by mathematicians (usually referred to in this case as postulates), statisticians, and scientists as part of their work.

Cause and Effect – Things Unknown

For all humans and groups of humans, assumptions act as shortcuts that eliminate the need for endless chasing of the effect-to-cause chain backwards to nowhere. Psychologists talk about basic human needs. They should add assumptions to that list because we wake up and face life each morning on the basis of subconsciously made assumptions. For one example, we all assume—unwittingly [“unwittingly” is not bad]—that there is an underlying rationality to the behavior of our domain of existence. Almost all of us wake up believing, assuming, that we are smart, that we can and will cope. That assumption is one of the forces that makes the world go around.

Any bad news in the above? No, a thousand times no. It’s okay to be human. Well, it’s more than okay. Being human is the best game in town. Woe unto those who would become dissatisfied with being human. Even The Ancients figured that out—as they vividly demonstrated in their story of The Garden and The Tree.

Sometimes, assumptions cause more problems than they solve. This is true when the assumption is wrong. Wrong? How can an assumption be wrong? Aren’t we supposed to make assumptions only when we run out of facts, when no data is available, when we have chased the effect-cause chain as far back as we can and an explanation is required?

Nobody knows who said it first but: Timing is everything. We must be careful to not decide, not choose, our assumptions too soon; or too late. This is especially true when we need broad agreement because the resulting assumption will affect a large group of people and will be controversial.

What Next? To Assume or Not to Assume?

Now here’s another thing to think about: if we have truly worked our way back along the effect-to-cause chain, past all the facts, then there is a certain amount of arbitrariness inherent in the assumption selection process. Hence a bit of humility might be appropriate. In this case, we must carefully consider the downstream effects of each of the candidate assumptions. And we must ask ourselves if it is really necessary to make a choice. Are we being forced to do that? If so, then those forces are effects that themselves have causes which must be examined to see if they are worthy of a response. Here, of course, I am talking about big assumptions that will have big effects. In this case, the need for individuals to make an assumption choice does not automatically imply a need for the group to also do that.

In conclusion, consider this application of the foregoing ideas: Common sense tells us that the Bible is long on enduring wisdom and short on twenty-first century knowledge. Organizations that get that backwards by assuming it is the other way around have a major problem on their hands.