Before heading into Changing World Views, let’s review how Wikipedia defines a World View.  It is “the fundamental cognitive orientation of an individual or society encompassing natural philosophy; fundamental, existential, and normative postulates; or themes, values, emotions, and ethics.” Or, in a more modest manner, “the framework of ideas and beliefs through which an individual interprets the world and interacts with it.”

World views have serious implications for a society’s understanding of reality; a world view influences what one recognizes or fails to notice in the world, how one views the “other”and gives rise to social and political ideologies for dealing with what or whom is considered “the other.” Linguist George Lakoff, whose work on “frames,” largely in the context of politics, argues that language, both its terms and structures are “framed” in a specific context identified with a specific world view. It is from within the frames that meaning and argumentation are created and function.

The idea that world views cannot be separated from the language used to talk about the world is somewhat discomforting. Language does not so much express a truth about something already known, rather it creates the unknown so that the known may be discovered. Thus, the claim is often made that language creates reality. Not only does language provide a basic grammar and structure for the categorization and expression of experience, but provides the structures of popularly perceived “givens” such as time, space, and causation.

Differences of opinion about causation, for example, are reflected philosophically in the questions regarding free will or determinism. Differences of opinion resulting in the descriptive and functional ways people express natural phenomena exist, not because reality is there staring us in the face, but because they are mental constructs from a vast reservoir of impressions. These constructs go beyond descriptions of the natural world. They are also inclusive of “values,” including methodologies, within the construct integrating social and political categories.

World views also involve religious perspectives and the creative power of religious language. The result is similar to any other world view in providing a framework of beliefs for interpreting the world and providing basic values for interacting with it. Specific religions provide the specific structures of ideas of time, such as a beginning and end, eternal cycles, or timelessness, and corresponding spacial and causal relations that transcend naturalistic explanations. More mythically based religious world views may be to a great extent dependent on non-rational responses to data and interpretations than to rational considerations or scientific descriptions of the world.

Such a religious world view is supported by a basic commitment to values present in sacred stories, parables, and other literary genre; whether from a different perspective they are considered true or false, real or fictional. The values, being inseparable from the literary and linguistic forms containing them, are to be “believed” as a unity, and are often considered certain or infallible, thus unchangeable units of reality. Furthermore, a kind of logical theory is possible (theology), by working from a presupposition of logical consistency. This logical theory can work within either a confined system (religious tradition and sacred text), or an open system involving all that is known by other systems of knowledge.

Because language is so integral to collective understanding within a world view, one language may be difficult to translate into another. This makes creative and corrective comparisons among world views challenging. This situation does not necessarily mean that there is “world view and linguistic relativity,” and that no mutual understanding can take place among groups with different views and languages. Even in very different languages and world perceptions, some degree of calibration is possible. Nevertheless, a world view determines the kinds of questions asked about the world and the kinds of answers expected in return.

World views can and do change. In the case of interacting societies, cultures, and world views expressed linguistically, both language and the understanding of the world are modified by constant interchange. Thus, some degree of “world view fragmentation” occurs across cultural contacts involving the collision of different systems of knowledge which contribute to formation of new world views and modifications in knowledge systems. This process is not a smooth or easy one. For example, over time we have witnessed how social and political ideologies have produced different views of the world. The concept of “manifest destiny” was responsible for creating the American landscape in terms of “property” and classifying the indigenous peoples as subhuman “savages” with few or no rights to land or deserving of human rights. More recently, we encounter creative concepts like ecology and conservation, versus natural resource exploitation and utilization.

Like the power of manifest destiny, political and economic ideologies cannot be separated from these other perspectives. Nor can religious beliefs impacting the value of conservation of natural resources for the present and the future be exempted from beliefs about the end of the world. Viewing resistance movements as “terrorist” or “freedom fighters” is another conspicuous example of how value systems and language mold views of reality, thus world views. We may not have experienced a “War of the Worlds,” but we are constantly involved in wars of “world views;” and the fact that we are involved in an ideological and verbal war rather than a peaceful transition is testimony to the power of values and morality that are endemic in every world view.

Religion of the Future: Art and Metaphor

Religion of the Future: Reclaiming the Subjective Pole by Art and Metaphor.

Organized religion is declining in the western world. Not only is the decline due to the failure of past theological and philosophical systems, but also to the successes of science in competing with religious traditions in describing the world. A religion of the future must come to terms with the place of science in describing the universe. This includes the philosophic assumptions about reality as well as how we understand humanity in the universe…

Living in the world is more important than knowledge. Religion as an art form contributes to the expression of such values. Characterizing such values as artistic or metaphoric expressions, avoids confliction with scientific theories and discoveries. Science progresses by building on past discoveries and is judged by that progress. The greatest artistic expressions, including religious, may have been composed in the distant past. The difference lies in specific understandings of human life and the wider universe. There is a different modus operandi. Humans live richly by metaphors, not heartless and value neutral scientific theories.

What About Science Vs Religion

Both science and religion are responsible for creating confliction between them, religion by denying the legitimacy of a naturalistic non-contradictory scientific approach to the world which tolerates no contradictions or false facts; and science by separating the material world from mind, or subjectivity, which results in depreciating what gives the emotional richness to human life, including spirituality.

Interpretations of quantum physics changed the deterministic nature of the micro world and allowed for freedom and creativity, humanly expressed as the operation of free-will. Restoring mind to the material universe by mutual measuring among subatomic particles changes the traditional idea of material. In addition, the cognitive sciences have argued for the metaphoric nature of all language including scientific language. Thus, a window has been opened to view how metaphors in both the arts and science operate in the real world.

Science tended to view the universe metaphorically as a machine, and following, humanity as a part of the universe also as mechanical. Religion retained a belief in an “other” or transcendent aspect of the world, commonly expressed in the Judeo-Christian faith with regard to human kind, as being “in the image of God,” or the universalizing metaphor of “Incarnation.” Metaphors, in themselves, are neither true nor false; rather their strength is in what they evoke.

Religion of the Future: Metaphors

Although the approach to scientifically associated metaphors differs from that of religion which is artistic, the ingredients were in place to allow for a new understanding of religion, one which is artistic and metaphoric in nature. Humans were co-creators in a creative universe, which increasingly becomes more “wonder-filled” and mysterious with scientific discovery. With the critical demonstration that mind is never eradicated by objectivity, scientific objectivity was nudged, largely through quantum physics, to readmit mind to the universe it investigated.

In science, the universe as machine metaphor is hard to shake off. If we promote this metaphor, the work of science relative to humanity will be algorithms and robotics. The future is up for grabs. Religious or spiritual metaphors play into artistic expressions of what it means to be human, to love, and be creative in art and morality, and to create religions. But science viewing the brain, as it does the universe, from the outside, depreciates mind, consciousness, and a sense of the spiritual, as an attribute of an imperfect machine, the brain.

As a machine, human beings are believed capable of improvement by computerization and robotics. Thus the future of human beings does not lie in flesh and blood bodies that relate to each other as artistic bodies, but in algorithms of extreme machines that can reproduce themselves. This view is basically genocidal. It is sometimes called the Technological Singularity, reflecting on the Big Bang as the place where everything begins. Computers and robotics replace humans as the creators of art and values.

The metaphor of man being created in the image of God gifts man as a “co-creator,” thus man co- creates the image of God inclusively; patriarchy is overcome not only by including women, but the whole of what human beings may create and understand themselves to be in a universal environment, including the values of justice, mercy, and grace, not only to each other, but the entire living world. 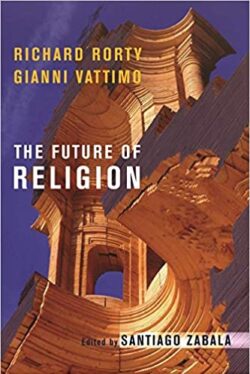 The Future of Religion

No religion can be considered superior to any other as a starting point; creativity demands a universal matrix in which to grow. Every religion will have to examine its metaphors in a context of diversity of cultures and societies to understand how they differ, and how they may coexist creatively and inclusively. But objectivity is not the primary means of this evaluation; this is an artistic and collaborative effort grounded in the mystery of what it means to be human, and what matters most for human life. In a sense we may refer to Kauffman’s understanding of Kantian Wholes: “the parts exist by and for the good of the whole, and the whole exists by and for the good of the parts.”